In beginning fish keeping there are several key steps to establishing a successful aquarium. The first step is to determine what type of system- saltwater or freshwater and what types of fish or invertebrates you wish to keep. Choosing the appropriate size of aquarium, substrate, decorations and filtration/life support will be decisions you make depending on the types of animals you have chosen. Once the tank is set up and water is added, it is time to begin “cycling” the system.  Like all living creatures, fish, jellyfish, corals and other invertebrates give off waste products (pee and poo).  These nitrogenous waste products break down into ammonia (NH3), which is highly toxic to most organisms.  “Cycling” the tank refers to the process of establishing your biological filtration; the bacterial colonies in the filter bed that convert ammonia to nitrite (NO2) and nitrite to nitrate (NO3).  In nature, the volume of water per fish (jellyfish, coral, etc) is extremely high, and waste products like ammonia and nitrite become diluted to low concentrations.  In aquariums, however, it can take as little as a few hours for ammonia concentrations to reach toxic levels.

The successful aquarist realizes the importance of establishing the nitrogen cycle quickly and with minimal stress on the aquarium’s inhabitants.

Once an ammonia source is established in your aquarium (i.e. fish waste), the nitrifying bacteria- Nitrosomonas bacterium, which are naturally occurring, will start a colony in the filter bed of the aquarium, breaking down the ammonia products into nitrite.  The nitrite is further broken down by other bacteria- Nitrobacter-into less toxic nitrates, which are released back into the aquarium. In some cases, anaerobic bacteria (meaning that they thrive in low-oxygen conditions) will obtain oxygen by converting nitrates into nitrogen gas (NO3 to N2) which then escapes through the water surface into the atmosphere.

When the nitrate levels rise and the nitrite levels fall to zero mg/L, the tank is fully cycled and ready to be stocked with the species you want to keep.  The cycling process normally takes anywhere from 2 to 6 weeks.  Testing the water for ammonia and nitrite on a regular basis is very important during the start up phase.

Water temperature has been found to be a key factor during the cycling process (Spotte, 1979). The nitrifying bacteria show greatest activity at 86F to 95F and some tests showed little or no activity below 40F. Narten (1999) reported that at temperatures below 70F it takes much longer to cycle a tank.  The optimum temperature for freshwater nitrifiers is 86F.

There are two methods to start the cycling process. One involves adding a bacterial solution to make the system cycle faster. I will provide more information on this method and several different bacteria products in the “ADDING BACTERIA” section. The other method involves adding a few hearty fish which will produce ammonia and begin feeding the bacterial culture, but at a slower pace.  Once the nitrite levels decrease more fish/critters can be added.  An aquarium with an established biological filter will have no detectable ammonia.

Nitrifying bacteria are classified as obligate chemolithotrophs.  This simply means that they must use inorganic salts as an energy source and generally cannot utilize organic materials.  They must oxidize ammonia and nitrites for their energy needs and fix inorganic carbon dioxide (CO2) to fulfill their carbon requirements.  They are largely non-motile and must colonize a surface (gravel, sand, synthetic biomedia, etc.) for optimum growth. They secrete a sticky slime matrix which they use to attach themselves.

Species of Nitrosomonas and Nitrobacter are gram negative, mostly rod-shaped, microbes ranging in length between 0.6 to 4.0 microns. They are obligate aerobes and cannot multiply or convert ammonia or nitrites in the absence of oxygen. 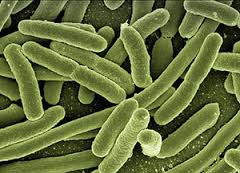 Nitrifying bacteria have long generation times due to the low energy yield from their oxidation reactions. Since little energy is produced from these reactions they are extremely efficient at converting ammonia and nitrite. Scientific studies have show that Nitrosomonas bacterium are so efficient that a single cell can convert ammonia at a rate that would require up to one million heterotrophs to accomplish.  Most of their energy production is devoted to fixing CO2 via the Calvin cycle and little energy (20%) remains for growth and reproduction. This is why they have a very slow reproductive rate.

Nitrifying bacteria reproduce by binary division. Under optimal conditions, Nitrosomonas may double every 7 hours and Nitrobacter every 13 hours.  More realistically, the will double every 15 -20 hours.  This is an extremely long time considering that heterotrophic bacteria can double in number in 20 minutes.  In the time that it takes a single Nitrosomonas cell to double in population, a single E. Coli bacterium would have produced a population exceeding 35 trillion cells!

None of the Nitrobacteraceae are able to form spores.  They have a complex cell wall that is surrounded by a slime matrix.  All species have limited tolerance ranges and are individually sensitive to pH, dissolved oxygen levels, salinity, temperature, and inhibitory chemicals.  Unlike species of heterotrophic bacteria, thy cannot survive any drying process without killing the organism.  In water, they can survive short periods of adverse conditions by utilizing stored materials within the cell. When these materials are depleted, the bacteria die.

The optimum pH range for Nitrosomonas is between 7.8-8.0
The optimum pH range for Nitrobacter is between 7.3-7.5
Nitrobacter will grow more slowly at the high pH levels typical of marine aquaria and preferred by African Rift Lake Cichlids. Initial high nitrite concentrations may exist.
At pH levels below 7.0, Nitrosomonas will grow more slowly and increases in ammonia may become evident.  Nitrosomonas growth is inhibited at a pH of 6.5.  All nitrification is inhibited if the pH drops to 6.0 or less. (Remember that in freshwater planted systems, it is not unusual to have low pH values. The plants do remove ammonia and nitrites.)

Care must be taken to monitor ammonia if the pH begins to drop close to 6.5. At this pH almost all of the ammonia present in the water will be in the midly toxic, ionized NH3+ state.
DISSOLVED OXYGEN

Maximum nitrification rates will exist if dissolved oxygen (DO) levels exceed 80% saturation. Nitrification will not occur if DO concentrations drop to 2.0 mg/l or less. (2ppm). Nitrobacter is more strongly affected by low DO than Nitrosomonas.

Freshwater nitrifying bacteria will grow in salinities ranging between 0 – 6ppt or a specific gravity between 1.0000-1.0038.

Saltwater nitrifying bacteria will grow in salinities ranging from 6 to up to 44 ppt (specific gravity between 1.0038 – 1.0329)

All species of Nitrosomonas use ammonia (NH3) as an energy source during its conversion to nitrite (NO2). Ammonia is first converted (hydrolyzed) to an amine (NH2) compound then oxidized to nitrite.  This conversion process allows Nitrosomonas to utilize a few simple amine compounds such as those formed by the conversion of ammonia by chemical ammonia removers.

Nitrosomonas is capable of utilizing urea as an energy source.

All species of nitrifying bacteria require a number of micronutrients.

Most important among these is the need for phosphorus for ATP (Adenosine Tri-Phosphate) production.  The conversion of ATP provides energy for cellular functions. Phosphorus is normally available to cells in the form of phosphates (PO4). Nitrobacter, especially, is unable to oxidize nitrite to nitrate in the absence of phosphates.

Sufficient phosphates are normally present in regular drinking water. During different times of the year the amount of phosphates may be very low.  A phenomenon know as “Phosphate Block” may occur.  If all the above described parameters are within the optimum ranges for the bacteria and nitrite levels continue to escalate without production of nitrate, then phosphate block may be occurring. Because there are so many phosphate-free synthetic sea salt mixes, this problem has become more prevalent among marine aquarists when establishing a new tank.  Don’t stress. Phosphate block is easy to remedy. Phosphoric Acid may be added to the aquarium and it is the simplest to use and dose. Mono-sodium  or di-sodium phosphate may be substituted. If you are using a 31% phosphoric acid mixture, a one time application of 1 drop per 4 gallons of water may be applied to activate the Nitrobacter. This small dosage of phosphoric acid will not affect the pH or alkalinity of the saltwater aquarium.

Minimal levels of other essential micronutrients is often not a problem as they are available in our drinking water supplies.

Nitrifying bacteria are photosensitive, especially to blue and ultraviolet light.   After they have colonized a surface this light is not a problem.  During the first 3 or 4 days many of the cells may be suspended in the water column.  UV lighting should remain off during this time and regular aquarium lighting has no significant negative effect.

Most US cities treat their drinking water with chloramines.  Chloramines are more stable than chlorine.   The type of chloramines formed is dependent on pH. Most of it exists as either monochloramine (NH2Cl) or dichloramine (NHCl2). They are made by adding ammonia to chlorinated water.  (We have a large amount of ammonia added to our city water -most of the reason the tap water here has a high alkalinity even though a low hardness). Commercial chlorine reducing chemicals such a sodium thiosulfate (Na2S2O3) break the chlorine:ammonia bond. Chlorine (Cl) is reduced to harmless chloride ions

(Cl–).  Since dichloramine has two chlorine molecules, a double dose of a chlorine remover is recommended.

Each molecule of chloramine that is reduced will produce one molecule of ammonia.  If the chloramine concentration is 2ppm then your aquarium system will start out with 2ppm of ammonia.  Chlorine Remover will reduce up to 2ppm of chlorine at recommended dosages on the label. During warmer months chlorine levels may exceed 2ppm. A double dose would be required to effectively eliminate the excess chlorine.

If you are unsure whether your water has been treated with chloramine, test for ammonia after neutralizing the chlorine. Residual chlorine or chloramines will kill all nitrifying bacteria and the other critters in your aquarium- fish, corals, jellyfish etc.

Nitrosomonas and Nitrobacter species of bacteria belong to the family NITROBACTERACEAE- the true nitrifiers. Five genera are generally accepted as ammonia-oxidizers and four genera as nitrite-oxidizers.  Of these, Nitrosomonas (the ammonia-oxidizers) and Nitrobacter (nitrite-oxidizers) are the most important.  Marine species are different from those that prefer fresh water, and yet, are very closely related.   Each species has a limited optimum range for survival. This is why you will find bacteria for the freshwater aquarium and bacteria for the saltwater aquarium.

AFTER ALL THE CHLORINE HAS BEEN SAFELY NEUTRALIZED, NITRIFYING BACTERIA SHOULD BE ADDED TO RID THE AQUARIUM OF AMMONIA.  DEPENDING ON THE AQUARIUM pH, 4 TO 7 DAYS MAY BE ADVISABLE BEFORE ADDING ANIMALS.

If the water supply does not contain chloramines/chlorine, and there is no ammonia, nitrifying bacteria may be added at the same time as a few starter fish.

If you are cycling your system “fishless”  you will need an ammonia source such as using ammonium chloride to feed the bacteria. 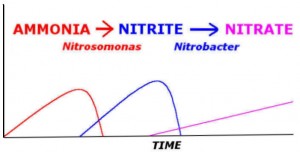 Here are a few companies which claim to have true nitrifying bacteria:

DrTim’s Aquatics, LLC, Moorpark, CA 93201
One & Only Nitrifying Bacteria for Freshwater Aquaria ( One & Only)
One & Only Live Nitrifying Bacteria for Saltwater Reef, Nano and Seahorse Aquaria
(One & Only) note: a 2 oz bottle will treat 30 gallons of water
Good for 6 months at room temperature, 1 year at 50°F. Best to keep refrigerated for longest shelf life.
Ammonium Chloride (solution- 1 drop /gallon water for 2ppm)