Did you know octopi have brains in their arms?

The nervous system of an octopus has multiple control centers, both in its head and in each of its arms. A severed octopus arm will continue to respond to stimuli even once separated from the rest of a dead animal’s body.

The octopus’s nervous system is a fascinating one. Some two thirds of its neurons reside not in its central brain but out in its flexible, stretchable arms. This, researchers suspect, lightens the cognitive coordination demands and allows octopuses to let their arms do some of the “thinking”—or at least the coordination, problem-solving and reaction—on their own.

And these arms can continue reacting to stimuli even after they are no longer connected to the main brain; in fact, they remain responsive even after the octopus has been euthanized and the arms severed. Very Cool!

Natural History
The great white shark is one of nature’s premier predators. Like all sharks, the white shark is equipped with two major food-finding senses: its sense of smell and its ability to detect electrical impulses. A shark smells with the aid of tiny structures called lamellae, located in two nostrils near the tip of its snout. The lamellae are so sensitive that they can detect one drop of blood in 25 gallons of water.

To hunt prey, a shark also depends on its ampullae of Lorenzini, a series of jelly-filled canals on its snout that sense electrical impulses. Combined with the sense of smell, this force-field detector makes the white shark an efficient predator.

Conservation:
For many years, the great white shark was hunted for trophies and simply out of fear. Only recently has concern for these top predators been aroused. As a vital member of its habitat, and one that helps keep its ecosystem in balance, the white shark now enjoys protected status in many areas of the world.
Unfortunately, the public’s impression of these animals often comes mainly from frightful stories and lurid pictures. Many photographic and diving-adventure businesses have formed around the white shark, primarily in South Africa, southern Australia and California. Although these programs have drawbacks, many people hope that such increased exposure to the white shark will help foster public awareness about its welfare.

More Cool Facts:
Great white sharks have been known to jump completely out of the water, usually when racing upwards from deep water to catch a fast-moving meal, like a seal or sea lion.

At any one time, a great white shark has more than 3,000 serrated, razor-sharp teeth arranged in rows. The first two rows are used to grab and rip out a mouth-sized piece of flesh, which is then swallowed whole—the white shark doesn’t chew its food. The teeth in the remaining rows rotate into use as mature teeth are lost during feeding.
Like all sharks, the great white shark has no bones; its skeleton is made of cartilage, the same tissue that gives shape to our ears and noses.

Great white sharks can go as long as three months without eating! 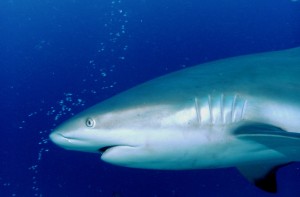 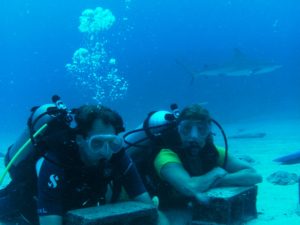 Gil & Michelle on a Shark Dive 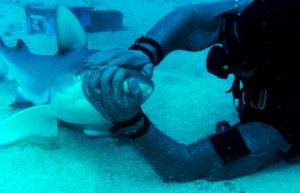